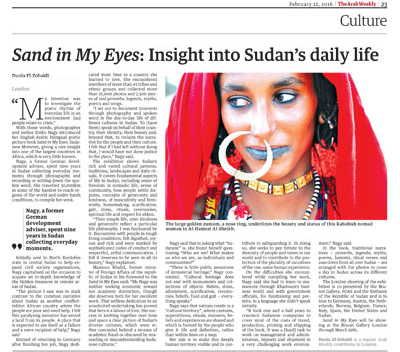 “The picture I saw was in stark contrast to the common narrative about Sudan as another conflict-ridden African country where the people are poor and need help. I felt this paralysing narrative has seized a land from its people. A place that is expected to see itself as a failure and a mere recipient of help.”
http://www.thearabweekly.com/?id=3815

"You leave the show wondering if the philosophically weilded cultural term ‘others’ is not in itself outmoded, wrung-out and anachronistic. Despite all the fears and tensions that face you today you are still living on the brink of the first truly global society, in which  there can perhaps be no ‘others’ any more. Nagy’s extensive research, her photographs, exhibition, and texts help you to reach this point in your thoughts."

The beauty of Sudan: Revealing a hidden treasure 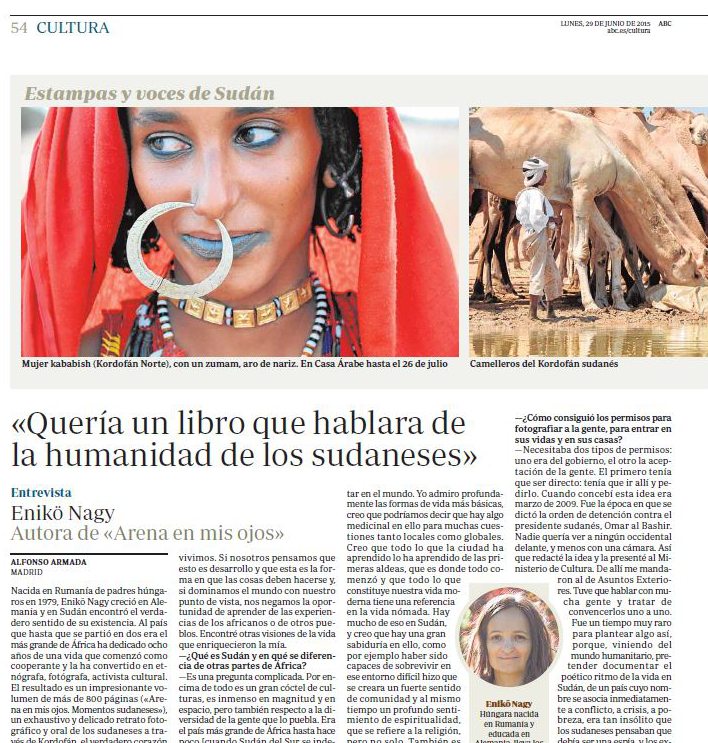 “Pictures and words converse before the viewers, who discover that Sudan is much more than the media simplification under the labels of “war” and “despair”, condemning many a country, or even a continent, to a portrayal that makes disgrace their essential feature. “If we only talk about war when we speak about Sudan, then the war has won.” Enikö Nagy’s look expands our perception of reality, a reality which breaks out of the straitjacket of topicality: “I wanted a book that speaks of Sudanese humanity, the culture that forms that humanity and what we can learn from it.” 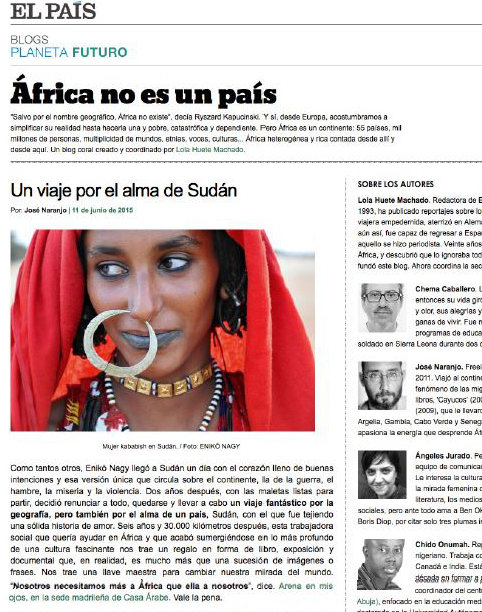 “Like many others, Enikö Nagy came to Sudan one day with a heart full of good intentions – to a continent mainly known from that single narrative of war, hunger, misery and violence. This social worker who came to help in Africa and ended up plunging into the depths of a fascinating culture brings us a gift in the form of a book and exhibition, which in fact, is much more than a series of images or phrases. It holds a master key to change our view of the world.”
http://blogs.elpais.com/africa-no-es-un-pais/2015/06/un-viaje-al-alma-de-sud%C3%A1n.html

"With her project, Nagy, who has repeatedly worked for UNESCO as a cultural advisor, hopes to contribute to development in Sudan and to building piece: “Reclaiming the invigorating and enriching aspects of culture, the cultural instruments and the traditional ways of conflict resolution is of special concern to me.” She firmly believes that bethinking the cultural roots and values of ethnic or regional identity, can unleash a force which initiates change from within."

“More than an ethnographic study, this handsomely illustrated book is a moving personal tribute to the people of the Republic of the Sudan, their land, their history and their traditions. Taking us on a fascinating journey through the environments, proverbs, beliefs, customs and world views of different tribes and ethnic groups, the expert and sensitive documenting of these cultures unknown to outsiders, appropriately focuses on the oral literature at the core of Sudanese cultures and life, opening a window onto Africa’s untold treasures of exemplary teaching and inherited wisdom.”

“As the Director of the Group of African Studies, I recommend the exhibition “Sand in My Eyes” by Enikö Nagy on behalf of our institution. We had the opportunity to visit the exhibition in Madrid and meet the photographer in person. In our view, both her photography and her approach to the people of Sudan are exceptional, far beyond the clichés we typically have of Sudan in Europe, beyond the conflict, which is constantly associated with the country. We found it an appealing and relevant exhibition that should be presented elsewhere too.”

Embassy of the Republic of Sudan, Berlin

“Please allow me to express to the photographer, author and curator of this work of art, Ms Enikö Nagy, on behalf of myself and the people of Sudan, our deep appreciation and thanks for the great effort and service she has rendered to our country.”

“The Foundation of Peace Culture and its President Federico Mayor Zaragoza recommend “Sand in My Eyes” by the artist Enikö Nagy, for its quality and original approach in presenting Sudan. This touching testimony of immaterial human heritage offers an intimate view of a people and the human experience. This valuable work contributes to promoting a culture of peace and cultural diversity, making a great contribution to peace efforts and the construction of a fairer and more united world.”

“The texts presented in this exhibition – many of them recorded for the first time in writing – are a revelation. With its authentic texts and pictures, “Sand in My Eyes” is an invitation to discover a positive world and to develop a deep admiration and respect for different, alternative ways of living, thinking and feeling.”